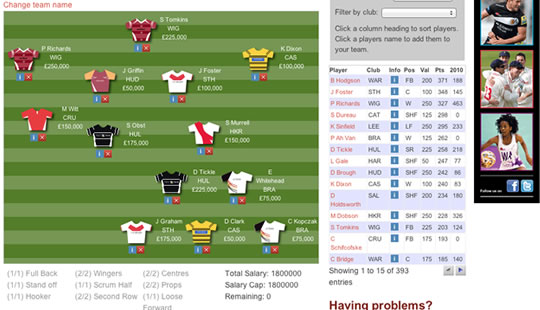 Towards the end of the 2010 season I was asked to work on the site as it undertook a radical redevelopment and was rebranded from Last Tackle to Love Rugby League. Working closely with the team we wireframed some initial design ideas and built on those to incorporate the new branding and started to bring the site up to date using new technologies such as HTML5. The site is built on the original custom CMS that was utilised by LastTackle.com which enabled a much smoother transition from the old site to the new without a loss of content.
Shortly before Christmas 2010 we launched the new redesigned site with the initial bits of new functionality including Facebook connect for user login along with a new forum for the site.

The Love Rugby League stats system was a project initially started on LastTackle.com during the 2010 season that started to build a system from scratch to house all of the data the team currently had. A large part of the redevelopment work was to enable the new site to tap into this wealth of data that covers fixtures going back to 2001, with more still to be added.
The system auto-updates from a XML live data feed provided by a third party company, it then forms the basis for large parts of the site powering not just the stats system itself but the club and player data across the site, live scores system, fixtures, results, league tables and is also used to run the updates to the fantasy and tipping competitions.

After the initial work on the project I continue to work with Love Rugby League improving and redeveloping areas of the site as well as providing a weekly blog article throughout the regular season. The first year of Love Rugby League has seen a massive increase in the traffic on the site and I shall be involved going forward in current season.

If you fancy doing some work together then get in touch. I'm always interested to get involved with new projects and writing gigs.

Have a look at some other stuff in my portfolio.